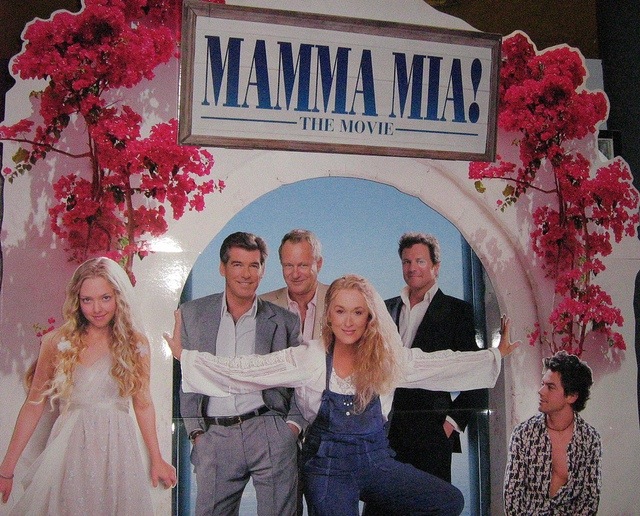 During August and September 2007, Skopelos received the star treatment when it doubled as the fictional island of "Kalokairi", the setting for the movie Mamma Mia!

The movie, which starred Meryl Streep, Pierce Brosnan, Colin Firth, Christine Baranski, Julie Walters, Amanda Seyfried, Stellan Skarsgård and Domonic Cooper, is based around the popular music of the 1970s  and 1980s Swedish band ABBA. The feel-good movie went on to become one of the more successful Hollywood releases of 2008.

Filming took place in several locations around the island though most scenes were filmed on or near Kastani beach on Skopelos' south west coast. As part of the set, the movie's production crew built a taverna bar and a jetty on the beach, however both were removed when filming was completed. The wedding scene was filmed at the church at Agios Ioannis on the north eastern coast.

Most of the stars rented villas on the island for the duration of their stay, with Pierce Brosnan, Colin Firth and Julie Walters being regularly spotted out and about on the island between filming commitments.

Pierce Brosnan has been quoted as saying that filming Mamma Mia on Skopelos was "one of the most laid-back shoots I’ve done".

Filming moved on to Skiathos for a few scenes and also to Pelion on the Greek mainland. The remaining footage was filmed at Pinewood Studios in the UK.

Though Mamma Mia has undoubtedly made a star of Skopelos, it is comforting to know that it hasn't spoiled the island. After the film crew departed, life on Skopelos quickly returned to it's regular unhurried and gentle pace, which is just the way the locals like it.